This photo post will be dedicated to impressive photographs of the mitre, the principal liturgical headgear of bishops. Derived from the camelaucum, a non-liturgical hat once worn by the Popes, the mitre is a close relative of the papal tiara, which also comes from the camelaucum. You can read more about the history, use, and meaning of the mitre at the Catholic Encyclopedia article.

We, O Lord, place on the head of this Thy bishop and champion, the helmet of protection and salvation, so that his face being adorned and his head armed with the horns of both Testaments, he may seem terrible to the opponents of truth, and through the indulgence of Thy grace may be their sturdy adversary, Thou Who didst mark with the brightest rays of Thy splendor and truth the countenance of Moses Thy Servant, ornamented from his fellowship with Thy word: and didst order the tiara to be placed on the head of Aaron thy high priest. Through Christ Our Lord. R. Amen 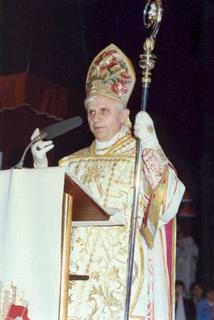 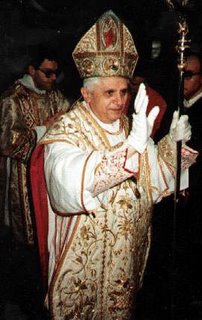 In the first photo, Joseph Cardinal Ratzinger in Mass vestments, wearing an interesting precious mitre of floral design. Mitres are traditionally always variations on white or gold. This floral design would be considered a variation on white. One can nowadays find mitres in red, green, and the other liturgical colors, but this is a very recent and very tacky innovation. The second photo is also Cardinal Ratzinger, at a different Mass with a different mitre. 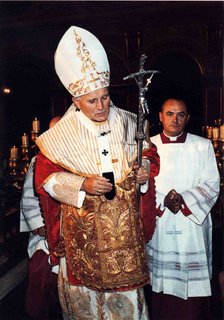 I love this photograph of Pope John Paul II at the Basilica of Santa Cecilia in Rome. The precious mitre is fairly simple, but it works very well with the splendid Mass vestments. The Pope is wearing the pallium and fanon on his shoulders, over a Roman chasuble and the pontifical dalmatic. Notice also the magnificent work on the alb. 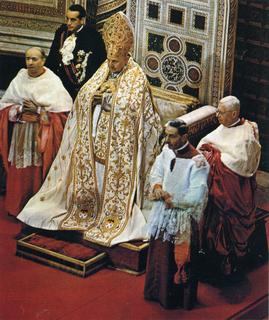 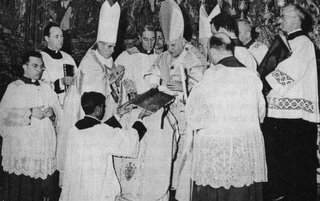 In the first photo, Good Pope John XXIII wearing mitre and cope at his throne in the Lateran Cathedral. In the second, Pope John officiates at the consecration of a new bishop. The co-consecrator on the left is American Bishop Fulton J. Sheen. The Pope, as principal consecrator is wearing the golden mitre and Mass vestments. The two co-consecrators are in cope and simple mitre, although Bishop Sheen's simple mitre seems to be quite tall. Third photo, Pope John kneeling and wearing a golden mitre. 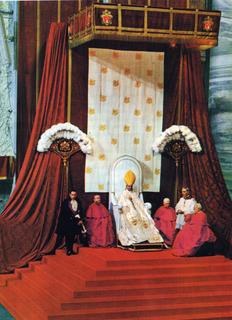 Pope Paul VI upon his throne, wearing mitre and cope. The kind of mitre he is using is called the mitra auriphrygiata, the golden mitre, for the obvious reason. The other two kinds of mitre are the mitra pretiosa, or precious mitre, (the kind we've seen above) which is more richly decorated and often bejewelled, and the mitra simplex, or simple mitre, which is plain white. There were rather elaborate rules in the old ceremonial for when each kind of mitre was to be worn. These rules were, of course, mightily simplified in the 1970s. 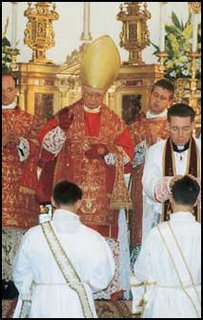 Jorge Cardinal Medina, at an ordination, dressed in pontifical Mass vestments and wearing the golden mitre. 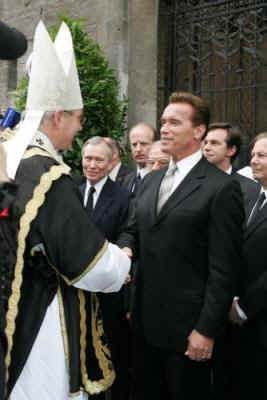 Christoph Cardinal Schoenborn, the Archbishop of Vienna, is shown here after celebrating a Mass for the Dead. As befits such an austere ceremony, the Cardinal is wearing the simple mitre of plain white damask. This would also be the kind of mitre he would wear if in the presence of the Pope. 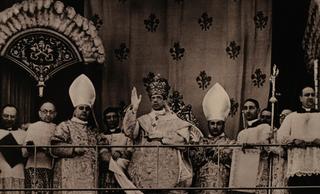 The coronation of Pope Pius XII. On either side of the Pope is a cardinal, wearing the (very tall) simple damask mitre with the dalmatic that marks him as a Cardinal-Deacon. It really pays to click this photo and see the full sized image. 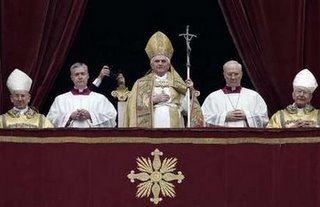 Pope Benedict XVI, at the Christmas 2005 Urbi et Orbi address, wearing a cope and his favorite precious mitre. Notice, too, the Cardinal Deacons in their dalmatics and simple mitres, flanking the Pope. 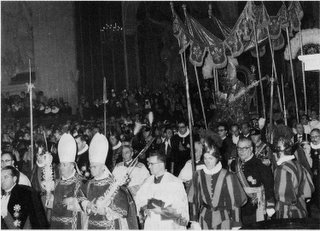 Another photo it pays to click on. For Palm Sunday, Pope John XXIII is carried upon the sedia gestatoria in procession. He is wearing a precious mitre, and two cardinal deacons precede his throne, wearing their dalmatics and white damask mitres. They're all carrying elaborately folded palm branches. 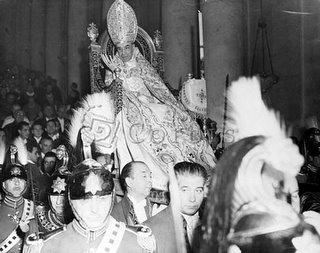 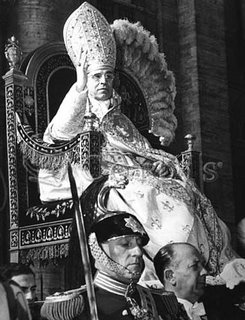 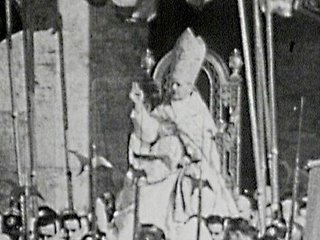 Two shots of Our Most Holy Lord, Pope Pius XII in the sedia gestatoria, wearing precious mitre and cope. In the third photo, his predecessor Pius XI. 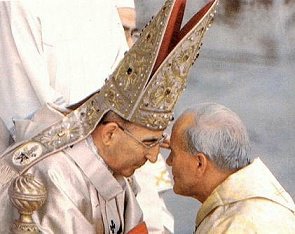 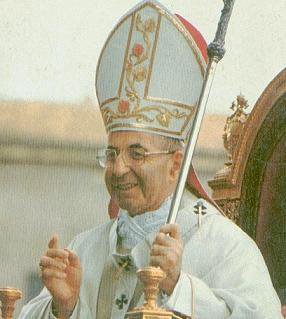 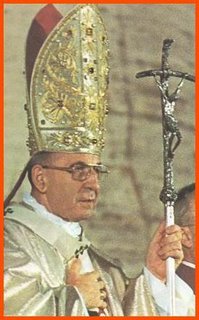 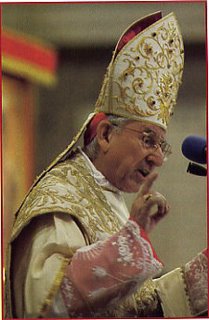 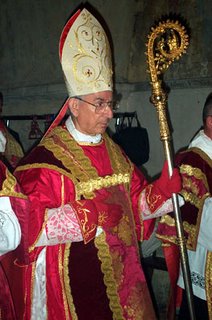 Some fine images of Darío Cardinal Castrillón Hoyos, of the Roman Curia. 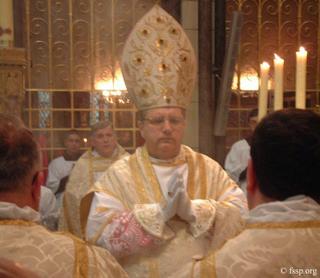 Monsignor Fernando Rifan, our favorite Brazilian bishop, wearing a precious mitre during the celebration of Pontifical High Mass according to the traditional Rite. 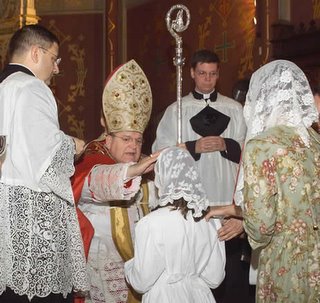 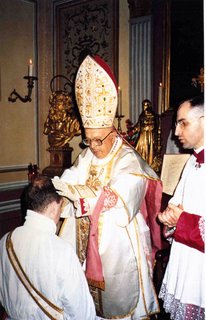 Pietro Cardinal Palazzini wears a precious mitre while ordaining a deacon to the priesthood. 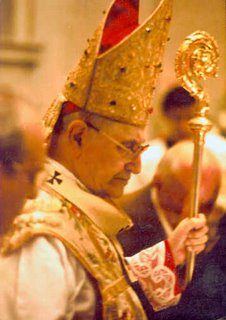 Old Cardinal Siri of Genoa, in the precious mitre. 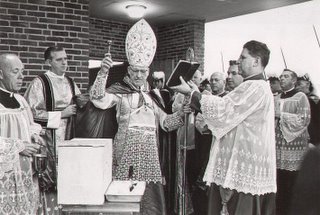 A vintage photo of Richard Cardinal Cushing of Boston, in precious mitre and cope, blessing what seems to be a cornerstone. 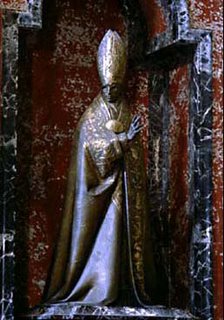 Francesco Messina's magnificent monument to Pope Pius XII in St Peter's Basilica. The Pontiff is vested in mitre and cope. 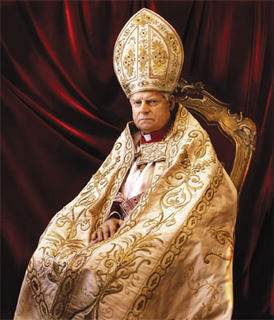 Angelo Cardinal Scola, the Patriarch of Venice, in mitre and cope. 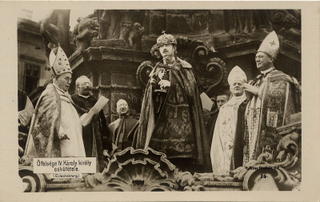 Here's a wonderful old vintage photograph from the coronation of Blessed Kaiser Karl as Apostolic King of Hungary. Attending the new King are a number of bishops in precious mitres and elaborate copes. 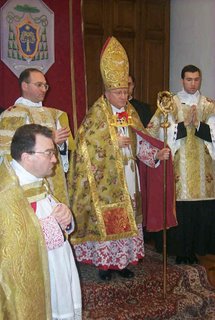 Cardinal Antonelli, the Archbishop of Florence, (judging from the arms, before he was created cardinal) in mitre and cope, and carrying the crozier.

An Austrian bishop at the Benedictine Abbey of Admont, wearing a precious mitre.